Am I losing my mind, or am I winning your heart?

The Scary Jokes (Liz Lehman) is an indie musician from New Jersey that creates music that falls under the genres of synthpop, indie pop, and bedroom pop. They often create music about the experience of girls who like girls. However, a common theme within their music, primarily April Fools, is abuse and recovering from said abuse. As such, most of their songs take on a more melancholic feel.

That's just the tip of the iceberg, though. While yes, a good majority of their published songs are about girls that like girls and abuse, there's more about just... girls who like girls. Hiding in the woods. Breaking shit behind the school. Songs that feel like they're more about love than the public songs about love. The world would be a better place if Car Phone was released publically.

That isn't to say I don't like the public albums - I really do! Why else would I be making this shrine? I'm just talking about the variety of music The Scary Jokes has under the surface, all of which is very underrated. As you can tell, I'm one of those fans that wishes that their music other than Icicles got popular. Maybe it's for the best, though, knowing how bandoms are (ahem, Lemon Demon fans. I'm looking at you). 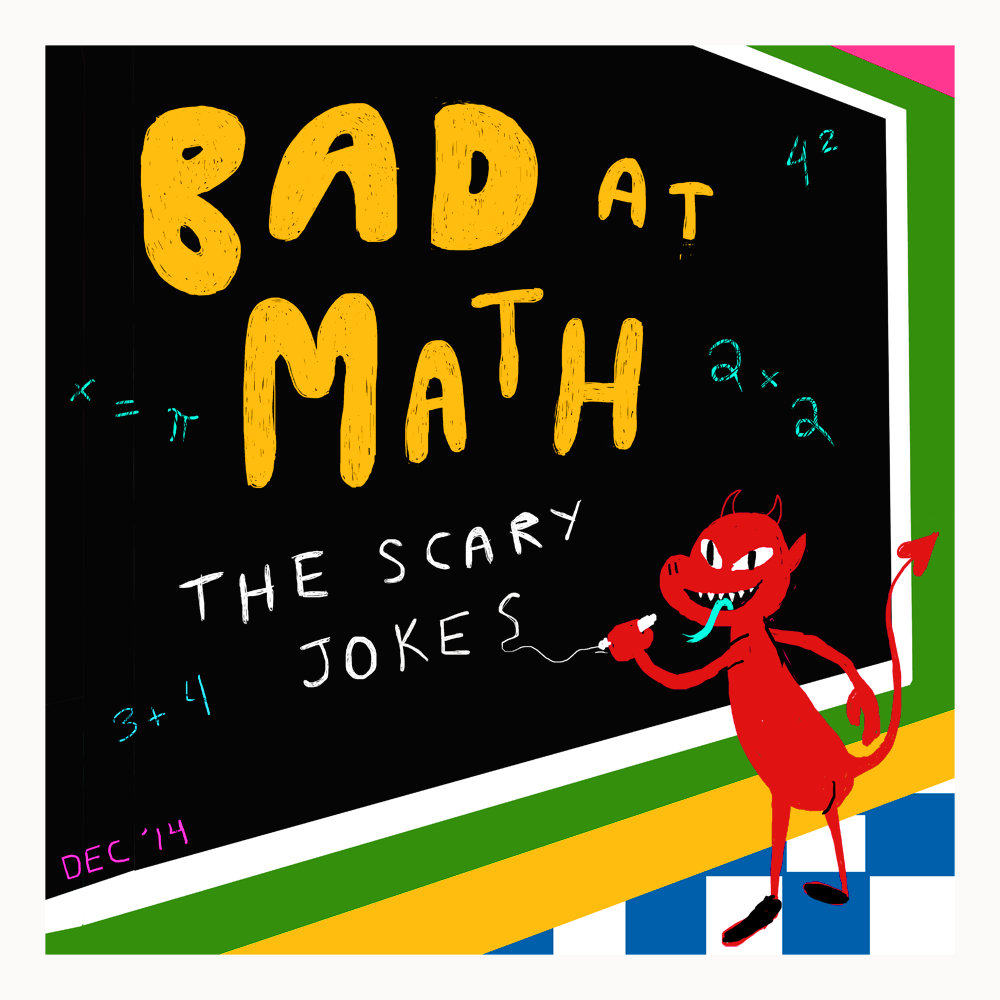 Liz's first published album under the label The Scary Jokes, it has more simple melodies than the albums that would come after it. This album has the pure, unfiltered raw emotion none of the other albums have - and not in a "growl tumblr feral" way, but in an awkward highschool "weird girl" way. You can genuinely feel the sadness and anxiety from your teenagerhood seeping out of it. As someone who's viewed as "the world girl" and has been for my entire life, this album really resonates with me. It gives me catharsis in the way that I know that I'm not alone, that I'm not the only "weird girl."

Either way, give this album a listen! It needs way more appreciation. 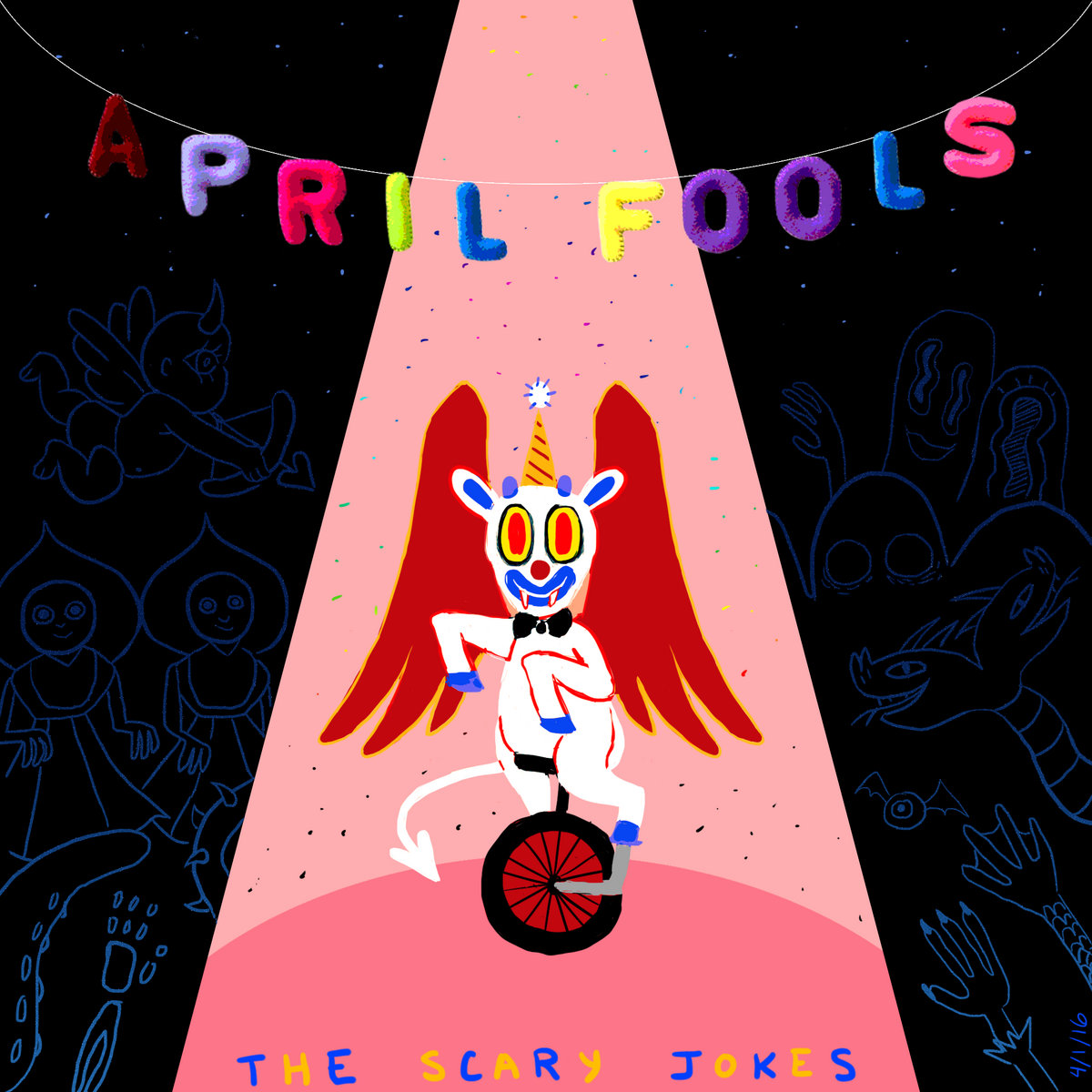 There once was a time when we walked crooked lines
But that's all over now
I'll walk with you into the blue!

The second album published under The Scary Jokes, already Liz seemed to be having a LOT of improvement within just two years! Literally from the beginning, which may be my favorite intro to an album of all time, you feel like you're in an entirely different world. It feels whimsical - magical, almost. The imagery of the clown on the unicycle and the cryptids in the background in the album cover really help with this feeling. The songs after Friends With You have the same whimsical vibe that I'm describing right now! This entire album is whimsical.

Despite that, the album is very melancholic - probably their most melancholic album yet, quite fitting considering it's about recovering from abuse. Also, this could be considered their first concept album, as the songs seem to be telling a vague story, what with the mentions of this "Rhonda" and all.

As someone who has suffered from abuse, I find a lot of catharsis within this album. Ever since I finally cut ties with my abuser, this album's meaning to me has increased as the days went on. It still means a lot to me, and probably will for the rest of my life! This is my favorite Scary Jokes album (and one of my favorite albums of all time for that matter), and for good reason. That being said, for the love of god, listen to this!!!

Full disclosure, I am a monster
A creature of despair, not that that should be a cause for concern
If there's one thing I've learned in all my years here
It's that despair is less abundant in those who understand
How to plant their hearts in community gardens!

Right off the bat, we've got my favorite opening lyric of all time. That's a real fuckin' powerful starter line.

The third album (and not final album, as Liz's working on a fourth one as of right now. Woo!), Burn Pygmalion is a concept album about a journalist named Jeanine and a popstar named Sylvia who start dating, but things get a little rocky because of Jeanine's all screwed up from a couple of past relationships... basically, Jeanine starts having doubts that Sylvia actually loves her and is terrified that she'll abuse her like her exes did, whilst also being extremely emotionally attached to her. Ever considered a BPD diagnosis, Jeanine?

That said, if you're a lesbian, you were abused at one point, and you have BPD, then this album is absolutely for you. I fit the checklist for everything I just listed, so this album gives me a lot of cartharsis. It also helped me get through another breakup! I think it'll have the same effect on you as it did on me.

Personal ranking of each album

You can find most of their unpublished music on their (now inactive) tumblr blog. There's also two youtube channels dedicated to archiving their music (here and here), as well as a soundcloud account! There are lots of archived Scary Jokes demos on youtube in general. Here is a link to a collection of demos from 2014 (AKA the Bad At Math era), uploaded by L French.

Here is a link to a collection of demos from 2016 (AKA the April Fools era), also uploaded by L French.

Here is a link to a collection of Burn Pygmalion demos, also uploaded by L French.